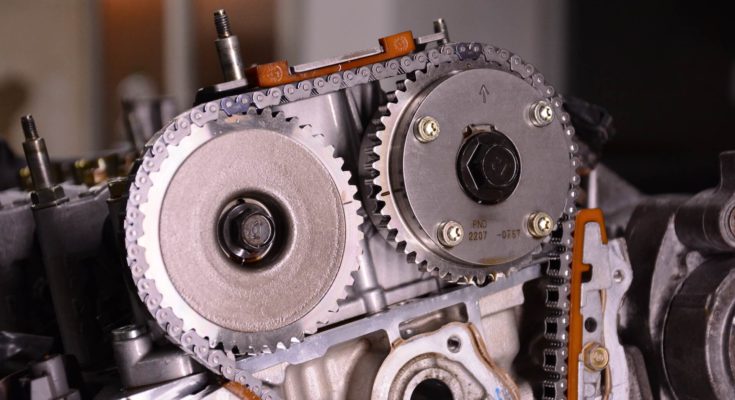 Which detail distinguishes Honda's K-Series Engines from the B-Series family of the '90s?

The same thing that delivers the muscular power of your legs to the wheels of your bike - a chain.

This part connects the crankshaft with the valve train and also powers the oil pump.

Classic B-Series motors are equipped with a rubber belt that takes on this job. While it's cheaper to build engines driven by a timing belt, you'll also run the risk that this belt snaps off and breaks the entire motor.

Now let's have a closer look at the timing chain, which you can find among all K-Series engines.

The major difference is the material they're made of - metal instead of rubber. However the rubber belt produces less noise while the engine is running, but the chain is much stronger and therefore more reliable.

Another difference is the location.

Regular timing belts are usually mounted outside the engine, enclosed by a plastic cover.

Timing chains can be found on the inside, where they're also lubricated with engine oil.

In comparison, belts are cheaper to produce and replace while chains last longer due to their material and structure.

Do I need to replace the timing chain of my K-Series engine?

According to Honda and many other car manufacturers, the timing chain doesn't have a regular replacement interval.

Okay, so we can drive our car guilt-free until we reach a mileage where it falls apart anyway.

Since the timing chain is such a critical part of the motor, you should include it in your inspection routine every 40,000-60,000 miles.

How do I inspect the timing chain?

There's a simple method that indicates the wear of the chain.

When the crankshaft pulley gets turned until the TDC mark lines up with the pointer on the chaincase, the TDC markers on both camshaft gears must also line up.

If they're off, the timing chain is probably stretched, or better elongated.

If you continue driving your car and the chain wears more, major engine failures such as a loss of power or malfunction error codes can occur.

In the worst case, the chain can skip one or more teeth of the camshaft gears. The entire timing will come off, preventing the motor from running properly.

Since we ran into some VTEC-system issues on one of our K-Swapped Civics, we did this inspection on a K20A2 motor.

To get free sight on the camshaft gears, you need to remove the valve cover.

After disconnecting and unplugging the ignition coils and loosening the cap nuts of the valve cover, you can take it off.

In our case, the culprit of the malfunctioning VTEC system was found.

While the marker on the crankshaft pulley lined up with the pointer on the chaincase, the TDC marks of the camshaft gears were slightly off.

Now we were thrilled to find out if the chain was elongated.

We planned to compare it with a brand-new replacement chain.

We had to dismount the crankshaft pulley, chaincase, auto-tensioner, and chain guides to get it out.

Loosening the bolt that secures the pulley was definitely the biggest obstacle since it's tightened with around 245 N⋅m (181 lbs⋅ft).

A guy working at a workshop for agricultural machines supplied us with a proper impact wrench that did the job.

If you don't have such tools, a long enough breaker bar can also convince the pulley bolt to come off. In this case, you need to lock the flywheel with a screwdriver from underneath - otherwise, you'd just turn the crankshaft.

Once the timing chain was out, we put it next to the new one.

The old chain was indeed stretched.

The replacement part was soon installed and everything was put back together.

We repeated the cranking process until all marks lined up.

This was the final result with the new timing chain:

As you can see in the photo, the markers are lined up as they should be.

Since then, the lack of power in the higher rev ranges has disappeared and the motor runs a lot smoother.

As with many other parts of your car, the timing chain should be part of the interval inspections every now and then.

It has been proven that they're not untouched from wear and eventually elongate over time in correlation with timing belts.

If they won't get replaced and the wear increases, major engine failures will occur.

To get a better visual understanding, watch the entire inspection and replacement process in the following video: